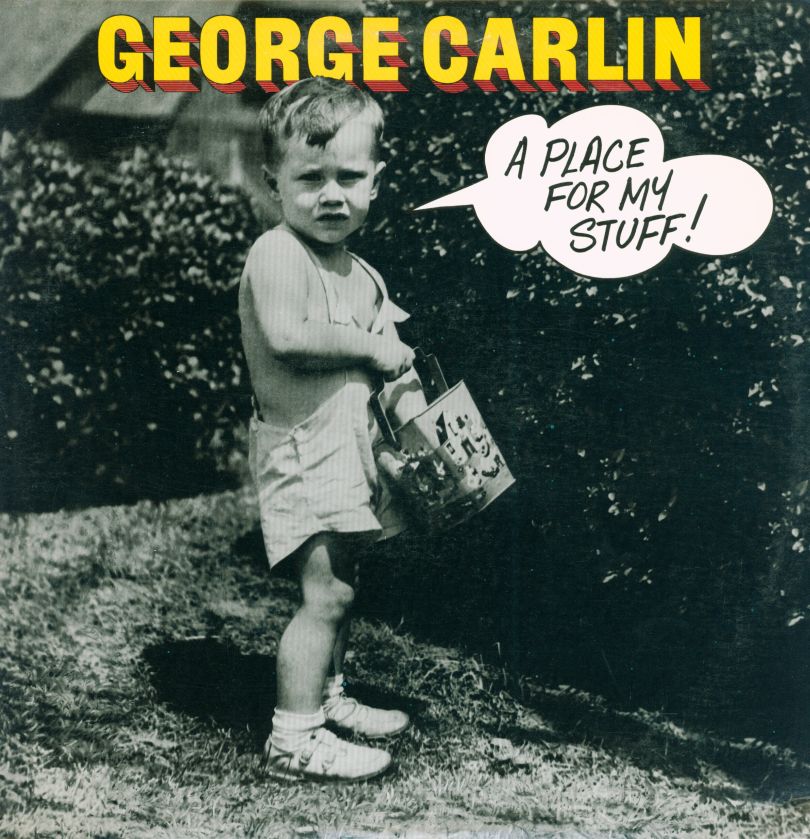 This was the very first George Carlin album I ever owned, and to this day I’d have to say that it’s my overall favorite. I think one of the reasons for that is because it includes many bits I had seen in Carlin at Carnegie (1983), one of my first full introductions to Carlin. I first bought A Place for My Stuff on cassette, but I don’t think it was released on CD until 2001, which of course I bought as well. Hell, I even named my blog after this album.

This is a unique Carlin album, because it’s not just all live stand-up comedy. It’s a mix of both stand-up and studio-recorded comedy sketches. As Carlin mentions in the biography Last Words (2009), he was planning on making a film version of stand-up routines mixed in with other footage called “The Illustrated George Carlin”, but plans for that fell through when he ran out of money to fund it. “In a way the album concept was an audio version of The Illustrated George Carlin – cutting away from live performance to recorded vignettes.”

To me, A Place For My Stuff as an album also marks a rebirth in Carlin’s style. Starting with this album and continuing into the 1980s, Carlin sounds much more quick, efficient, and focused than he had ever sounded before.

The album was nominated for a Grammy in 1983, but lost to Richard Pryor’s comeback album, Live on the Sunset Strip.

I was rather surprised that Carlin didn’t have too many good things to say about the A Place for My Stuff album! Here’s an excerpt from Last Words (2009):

“I hadn’t recorded an album in five years – after doing one almost every year -— and it would be a talking point: “Check this out: George is on his way back.” […] To do something different and attention-getting, I needed to get back to a concept album. I made it half live, half in studio. It was called A Place for My Stuff. Overall I felt I didn’t pull the concept off, although there’s some good material on it. It was the first time I used the line: “Why is it that the people who are against abortion are people you wouldn’t want to fuck in the first place?” The stand-up stuff was passable. The studio stuff really stunk. I had no experience in the studio and I wasn’t about to let anybody help me. But it was something to talk about, and the “stuff” routine, which was the opening of the live portion, eventually became a signature piece for the next generation of material.”

There are three female characters on the album: the interviewer in “Interview with Jesus”, and the two from “Asshole, Jackoff, Scumbag”, Ethyl Schwanz and Ola May Critter. For a long time I didn’t know who supplied these voices. There are no credits on the cassette version, nor the CD version, and no mention in the Carlin’s biographies Last Words nor 7 Dirty Words. There are credits on the back cover of the vinyl version, which I didn’t know about, but more on that later.

Sometime in the 90s I was listening to the album with my brother, and he commented that Ethyl sounded like Toby, the rude secretary from one of our favorite TV series at the time, HBO’s Dream On. Toby was played by actress Denny Dillon, who had also been in the 1980-81 season cast of Saturday Night Live. Some sources I found on the web listed Denny Dillon among the album credits, but those sources seemed highly questionable. George’s daughter, Kelly Carlin, told me that it was Lois Bromfield. Bromfield did indeed do a video version of the “Interview with Jesus” with George Carlin four years later for the HBO pilot Apt 2-C (1985), but that definitely doesn’t sound like her voice on the album.

Finally in March 2013, I got in touch with Denny Dillon herself. She confirmed that it was in fact herself on the album. Here’s what she said:

“Yes I am the voices on the George Carlin album. He had seen me on Saturday Night Live and asked me to do those voices. I didn’t actually realize I was uncredited, but it was me, doing all three of the voices. Happy you recognized that! They were characters of mine and I adapted them. The New Yorkish one [Ethyl Schwanz] is “Pinky Waxman” and the midwest voice [Ola May Critter] [is] “Nadine”, characters I had created and did on SNL.”

At the time of this writing, Dillon leads a Hudson Valley-based comedy group called Improv Nation.

The credits for the album are not on the CD or cassette, but only the vinyl. Here they are: 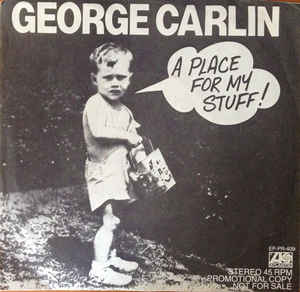 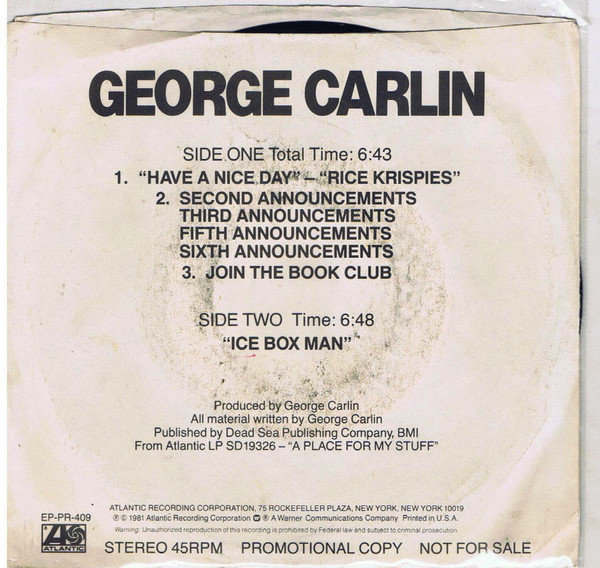 Atlantic Records also distributed a promotional-use only E.P. for radio stations as a 45 rpm record (EP-PR-409). The “Have a Nice Day” routine is listed on the record, but doesn’t actually appear on it. In effort to make these routines “radio safe”, any segments with swear words either have the words bleeped out (like the “fuck” in “Snap, crackle, fuck him!”), or are removed (such as some of the more risqué book club titles).