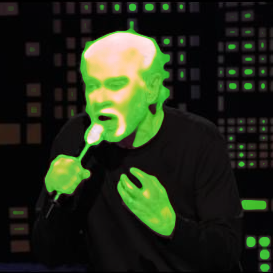 “It’s not anger. Angry is getting into a fistfight, which I’ve never done. Angry is losing your temper and regretting it. People who have been around me for 20 minutes or 20 years will tell you they’ve never seen me angry. Now I can get irritated like anyone else – in traffic, on a slow line in a store, at a dumb clerk. Hey, that’s natural, especially when you’re an efficient human being and you like things to go properly. But angry? Not me. […] It’s dissatisfaction and disappointment.”

“The noisier the culture becomes, the stronger your voice has to be, to be heard above the din. This was a conscious thought – that I’d better raise the level of my voice and therefore the intensity of my metaphors and images and words and topics to get and keep people’s attention. There was another reason to turn up the volume. There was a comedy boom in full swing during the eighties. I was always being told about the hot new guy or the hot new woman. […]

Then one of three things happens. Either: “No threat! No fucking threat at all!”

Or: “This guy is really good. But he’s not on my block. So no threat either.”

Sam Kinison was a “WHOOOA!”

When he started catching fire in the second half of the eighties I remember saying to myself: I’m going to have to raise my voice. […] Without wanting to wipe him out, I had to raise my level to where I wasn’t lost in his dust. Be smarter. Be louder. Be on my fucking toes. And though the general proliferation of comedians presented no threat either, the sheer numbers that were happening, the sheer fact that there was a comedy boom, was a spur. You have to run a little faster, show ‘em why you’re out in front. It’s not the accumulated credits, George, not the years you’ve put in. It’s what you do last week.”