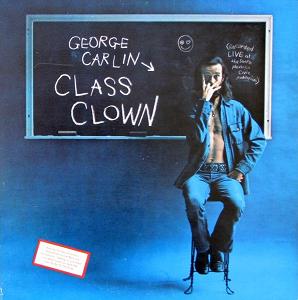 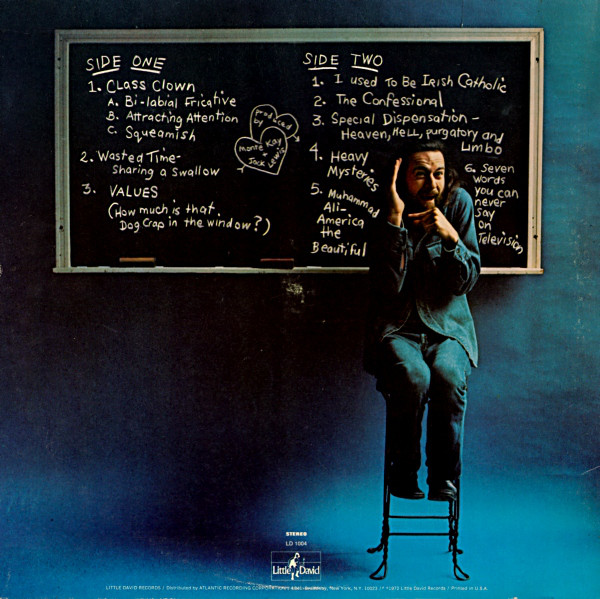 This album is perhaps most famous for the routine “Seven Words You Can Never Say on Television”. Contrary to popular belief (including numerous obituaries about Carlin), it was not this “Seven Words…” track that got Carlin in trouble with the FCC. Rather, it was a later variation called “Filthy Words”, found on the album that followed this, Occupation: Foole (1973).

Class Clown has a warning label which read “Warning: this record contains ‘Seven Words You Can Never Say on Television.’ Hearing it could affect your mind, curve your spine and lose the war for the allies.” Only a few weeks after recording the album, Carlin was busted on June 21st at the Summerfest in Milwaukee for “indecent language”. The inside record sleeve shows black and white versions of the same photos on the front and back of the album, except that written on the chalkboards is the poem “The Hair Piece” from FM & AM (1972).

As the title suggests, many of the album’s other routines are Carlin’s reflections of his time in school. “Corpus Christi School[,] New York City” is mentioned in the liner notes, though Carlin also attended Cardinal Hayes High School in the Bronx. This also marked the first time Carlin started to address the topic of religion.