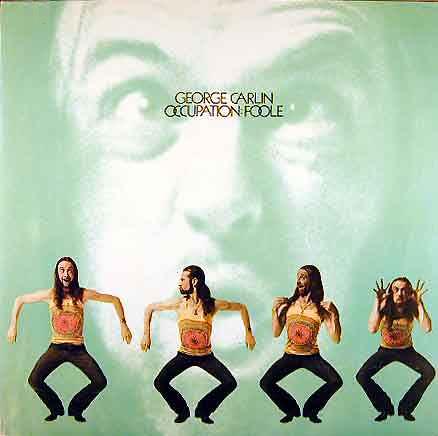 Every time I’ve shown this album to somebody, I always get the same reaction: “Who is that on the front? That’s George Carlin? Really?!?” According to the box set liner notes, Carlin said that “a lot of cocaine went into the photographs on that one, though.”

As with Class Clown (1972), Carlin shares more stories about his youth in New York. Though this time instead of talking about religion, he talks about race and ethnicity, as well as drugs. Regarding the album, he’s said, “There was more autobiographical stuff … trying to describe the neighborhood and the black/white dynamic, and beginning to get into some other things like childhood clichés, which later would be very useful for me.”

This album is perhaps most notorious though for the closing track, “Filthy Words”. It’s similar to “Seven Words You Can’t Say On Television”, with some further elaborations. Carlin’s performance of “Filthy Words” is interrupted by somebody handing him a note on stage. You can hear Carlin pause and say “Thank You” as he takes the note, then reads it. Carlin then shares the happy news with the audience: that he had just won the Grammy that night for Best Comedy Album (for FM & AM (1972))! Unfortunately, on October 30, 1973 somebody heard the piece on the radio, objected to it, and long story short, all the shit went down with Carlin and the FCC. I’m not going to bother to repeat the whole story here; you can easily look it up.

The album was nominated for a Grammy in 1974 for Best Comedy Album, but lost to Cheech & Chong’s Los Cochinos.