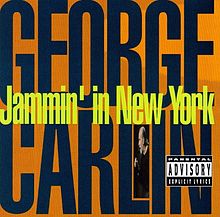 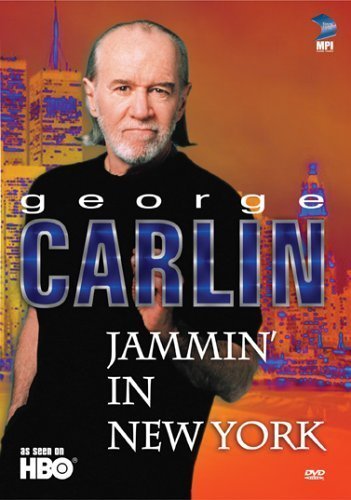 In Last Words (2009), Carlin states, “Jammin’ In New York has always been my favorite HBO show, but it was more than just a favorite. It lifted me up to a new plateau, a good plateau. It became my personal best, the one I had to beat, the template for future HBOs in terms of craft, artistry and risk taking.”

Carlin also said that the album was dedicated to Sam Kinison, even though this doesn’t appear on the liner notes (Kinison had died just 15 days prior to the recording).

The performance manages to break down into just 5 particular topics: a comedy commentary piece on US war politics and history, some of Carlin’s signature observational humor, a routine on the language of airline travel (as I’ve said before, jokes about airplane riding has become a predictable thing for hack stand-ups, but Carlin’s take on the topic is original and, most importantly, funny), a rant on golf and what it symbolizes, and finally a response to the growing environmental movement at the time.

The back of the CD also includes one of Carlin’s quotes that later appeared in Brain Droppings (1997): “There are nights when the wolves are silent and only the moon howls.”

This album won the Grammy (FINALLY!) in 1994 for Best Comedy Album.