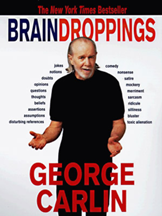 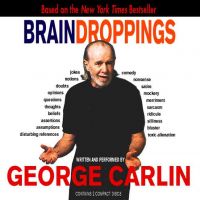 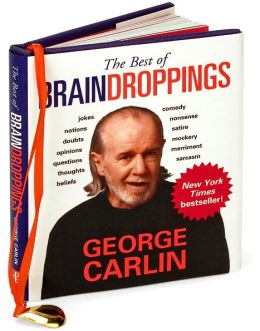 Brain Droppings was George Carlin’s first “real” book, if you don’t count his 1984 color-paged book Sometimes a Little Brain Damage Can Help (1984). I saw Carlin perform live sometime before the book came out, and he mentioned the up-coming release of it. He made it clear that it was not an auto-biography (“That shit comes later.”), but a book that would include all new material, aside from the “Stuff” routine, and “Baseball and Football”.

In reality, the book includes other material which had shown up on his previous albums, such as “The Book Club”, “Killer Comic” (part of “Death and Dying”), and a few shorter things. But most of the book was still brand new. Some routines also made their way into HBO specials in the years that followed, including a bit about sun worship which ended up in You Are All Diseased (1999).

Besides being released on hardcover and paperback, a pocket-sized edition of excerpts was published called “The Best of Brain Droppings”.

Carlin recorded an audio version of the book, released on two CDs in 2000. It won the Grammy in 2001 for Best Comedy Album. The audio book however is only an abridged version. As far as I know, no unabridged version exists (though I would love to be proven wrong about that!). I’ve listed the track names here. I also took the time to look up which pages of the book these excerpts were from, in trying to determining what parts of the book had been left out.