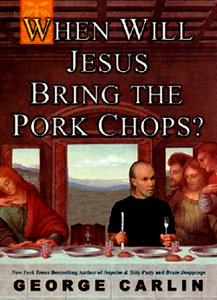 This was Carlin’s third and last “major” book (I don’t really put his slim 1984 book Sometimes a Little Brain Damage Can Help (1984) in the same category, and neither did Carlin). Some of the new writings here are more surreal and twisted than the ones found in his two prior books. This includes a mix of new material as well as routines that showed up on some different albums and HBO specials, before and after. Regardless, I remember how because of the title, some outlets like Wal-Mart wouldn’t carry it, at least not at first.

I’ve noticed that Amazon.com at some point had a users’ rating of about 3 out of 5 stars. After inspecting the reviews a little more closely, I noticed that a lot of what was driving down the rating was a high number of one-star reviews from angry Christians. But here’s the funny thing: most of these reviews were written by people who 1) clearly had no knowledge of the book’s contents; only its title, and 2) had never reviewed anything on Amazon.com before or since. It’s pretty clear that these Christians made a mobilized effort to create Amazon.com accounts for the sole sake of giving this book (that they hadn’t even read) a one-star rating. Or maybe it was one Christian who dedicated the time (maybe even a bot script) to do this.

How fucking low is THAT? If you have an Amazon.com account, do me favor: go to the page for this book, and find these 1-star reviews. I don’t mean just any 1-star review, but the ones that were, again, written by people who clearly hadn’t even read the book, and curiously have never reviewed any other items. When you find such a review, click on the link to report it for abuse. That’s what I did on all these bogus “reviews”. Maybe if other Carlin fans get on this, Amazon will remove them. While you’re at it, give Carlin’s stuff a HIGH rating and good reviews if you like them!

Audible.com released an unabridged audio version of the book, read by Carlin himself. It spans 7 discs. But despite being called “unabridged”, I noticed that it’s still missing a piece or two, such as “Count To A Billion”.