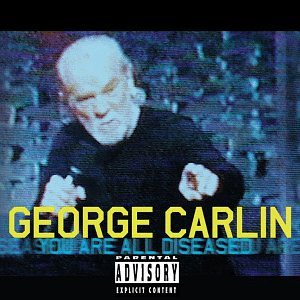 I remember anxiously awaiting this show. I had my VCR all set and ready to record the live broadcast on HBO. And taped it, I did. If there’s a performance of his that I’ve long considered to be Carlin’s magnum opus, it’s You Are All Diseased. The title itself appeared as a single, isolated line in the book Brain Droppings (1997).

The album closes with two pieces that have since become Carlin classics: “Religion” and “There Is No God”. I made a point in closing the very first episode of my podcast with these, and starting with the track “Angels”. He had done an earlier version of these on the George Carlin: 40 Years of Comedy (1997) special, and I saw him do the pieces live on the road in 1998 or so. In fact when I saw him live, the piece was preceded by his rant on “American Bullshit”, and the line he used to segue into the “Religion” piece was: “There’s enough bullshit in the news media to fill a second Bible.” By the time he recorded You Are All Diseased, he had changed the set to include the routine “Businessmen”, which meant changing his segue line into “In the bullshit department, a businessman can’t hold a candle to a clergyman.”

You Are All Diseased was nominated in 2000 for the Grammy for Best Comedy Album, but lost to Chris Rock’s Bigger & Blacker.

The liner notes to the You Are All Diseased album include several quotations: