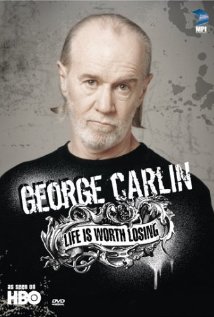 The show ends with the big closing tracks “Excess: Fires and Floods” (which on the CD version is rolled into the “Yeast Infection” track), and “Coast-to-Coast Emergency”. The “Coast-to-Coast Emergency” piece was originally called “I Kinda Like It When a Lot of People Die”, and was planned for his 2001 special, which itself was to be titled the same. However, with the the 2001 HBO special scheduled in New York just two months after 9/11, the routine was renamed and shelved until this release.

A few months before the HBO special was recorded, I saw Carlin do a similar set live in New Hampshire. Some people really didn’t even know what to make of the whole “Coast-to-Coast Emergency” routine, and one asshole from the audience even yelled “You suck!”

The album was nominated for a Grammy in 2007, but lost to Lewis Black’s double album, The Carnegie Hall Performance.