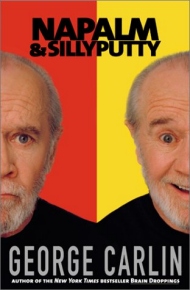 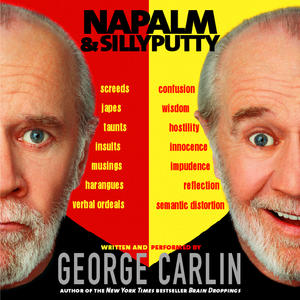 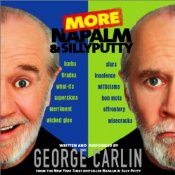 This is Carlin’s second “major” book, and third book overall. As for the book’s title, Carlin explains in the book’s introduction:

“Sometime ago I was struck by the fact that, among many other wondrous things, Man has had the imagination to invent two such distinctly different products. One, a flaming, jellied gasoline used to create fire, death, and destruction; the other, a claylike mass good for throwing, bouncing, smashing, or pressing against a comic strip so you can look at a backwards picture of Popeye. I think the title serves as a fairly good metaphor for Man’s dual nature, while also providing an apt description of the kinds of thoughts that occupy me, both in this book and in my daily life: on the one hand, I kind of like it when a lot of people die, and on the other I always wonder how many unused frequent-flier miles they had. The only difference between lilies and turds is whatever difference humans have agreed upon; and I don’t always agree.”

While most of the material in Brain Droppings (1997) was new, there’s a lot of material in Carlin’s Napalm & Silly Putty which showed up on some earlier album or HBO special. Usually the written versions here in the book have some variations to them.

Although these four discs do cover a lot, there are still unfortunately plenty of pieces from the book that were left out. One of these is one of my absolute favorite written pieces from Carlin, “Seven Death Wishes”. As far as I know, no full, unabridged version of the book has ever been released as an audio book.

To make matters more confusing, some sites have named the audio book tracks in a way that are either completely mismatched. Others use different names for the tracks than the titles used in the book. At some point I took the time to see what pages each track covers, what the name of the routine is, and what extra stuff was left out. My main reason for doing this is because I play these tracks from time to time on my podcast, and I like to have an idea of what stuff from the book I’ve played and haven’t played before. So here are the names of each track, with the name as it’s called in the book in [brackets] if it differs, and what pages it was taken from.

Not included in the audio book

Here are the parts of the physical book which were NOT included on either double-CD set. As stated earlier, I’m particularly upset that “Seven Death Wishes” was never included, because it’s easily one of my favorites from the book.