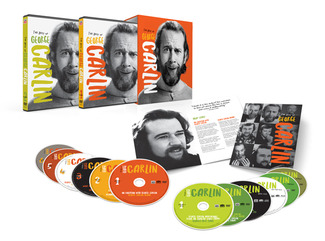 This box set is almost disc-for-disc identical to Commemorative Collection (2018), right down to the liner notes. Though no poster is included.

There are however two additional DVDs here whose contents you won’t find on Commemorative Collection (2018). These contain a total of six episodes from The Tonight Show Starring Johnny Carson, spanning 1972-1977. Granted, these don’t cover every appearance Carlin ever had on the show. In fact, as the liner notes explain, Carlin appeared on the show a total of 32 times during this period alone, seven of them as a guest host! But the Carlin appearances here include some of his stand-up, some routines as a duo with Flip Wilson, and of course interviewing by Carson. Also, the six shows here are complete episodes from the show, not just the parts with Carlin.