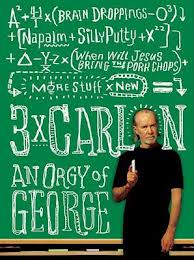 The book ends with an additional 31 pages of previously unreleased writings. The first half of this is a series of routines he later incorporated into Life Is Worth Losing (2006). The rest consists of a 3-part piece called “The Sensitive Physician”, followed by “Celebrity Crystal Ball” (similar in style to “Celebrity Predictions” from Sometimes a Little Brain Damage Can Help (1984)), “Idea Flow” (which also previously appeared in that book), and a long piece called “Keep It Off the News” on various types of news pieces which shouldn’t be considered news.

I see the book going for under $8 these days on Amazon.com, which is an absolute steal. If you don’t own any of Carlin’s books, just get this mega-volume.