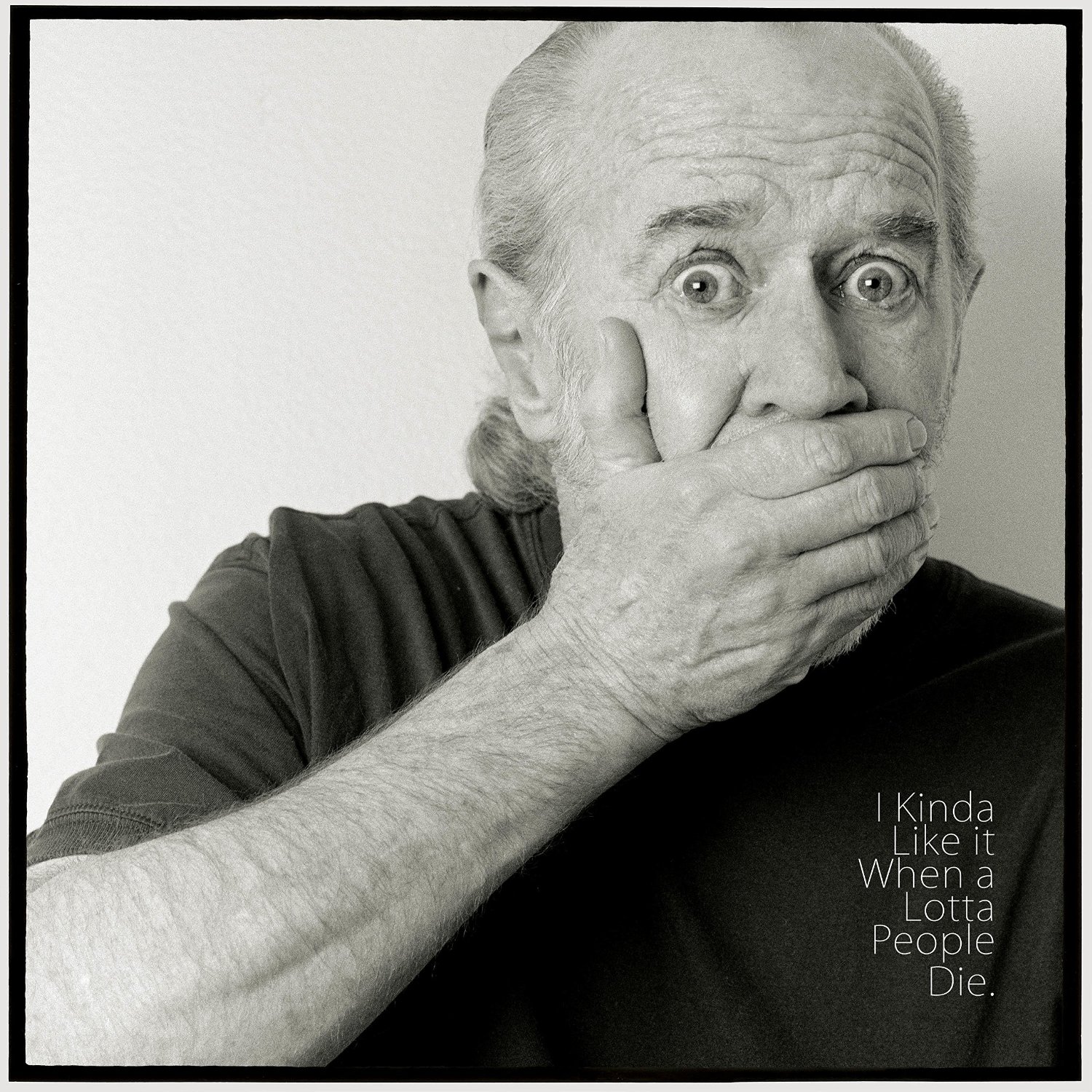 “I Kinda Like It When a Lotta People Die” was the original working title of Carlin’s 12th HBO special, to be recorded in New York that November, 2001. It was also the title of the closing routine he had originally planned for that performance. However, after the events of September 11th, Carlin made the decision to drop the routine from the set, add some new material, and rework everything into what finally became his actual 2001 HBO special, Complaints and Grievances (2001).

The dropped routine itself, “I Kinda Like It When a Lotta People Die”, was eventually reworked several years later into “Coast-to-Coast Emergency”, the closing track of his 2006 HBO special, Life Is Worth Losing (2006). As Carlin said in his biography Last Words, “I honed it all that time [since 1999] and it evolved into a complex catastrophe leaving millions dead in every possible kind of disaster, unfolding across the continent, disrupting the laws of nature, full of a kind of grisly poetry, a real tour de force, along the lines of ‘The Planet Is Fine’, but darker and madder.” He adds that after 9/11, “Osama bin fucking Laden hadn’t just blown up the World Trade Center. He’d blown up the best piece I’d written in ten years. I’m a realist. We changed the name of the show to Complaints and Grievances. […] Hard-core fans were probably hoping I’d do something about 9/11. I did mention it – the elephant in the living room no one was talking about – which got a kind of hopeful laugh. But I left it at that and kept the focus on strong observational stuff […] But there was a hole in the show the size of Ground Zero.”

This 2016 release however is not a complete recording of the original show he had planned. Rather, it’s a compilation of essentially unreleased material, sourced from cassette tapes in Carlin’s personal archives.

The first track is from his early home recordings, at the age of 20. This was while he was still working with NBC Radio WEZE in Boston as a board announcer. He rants about police and fireman, and argues about individualism. I was surprised he had these rants in him as far back as 1957; they sound much more like the sort of thoughts he’d have 15 years later, long after deciding to quit doing safe comedy for television and developing his more controversial routines.

Tracks 8 and 9 are new anecdotal “interviews” with two people who knew and worked with Carlin, sharing some stories about him.

The rest of the tracks are, of course, various live recordings from 2001, including the aforementioned title track (recorded June 23rd, 2001) and other miscellaneous tracks which never wound up on any other official released albums or HBO specials, recorded Sept 9-10, 2001, at the MGM Grand in Las Vegas. I remember hearing some of these when I saw him live in the early 2000s (“The Fecal Differential”, “Tired of Songs”, “The First Enema”, the last of these also having wound up in one of his books). “Uncle Dave” is essentially another variation of the title routine, and much closer to what became “Coast-to-Coast Emergency”.

The CD sleeve contains a short essay by comedian Lewis Black, along with a collage of pictures, and a couple of hand-written notes from George Carlin. One of these notes reads, “Everything should be open to examination. Everything should be open to questioning.” The other reads, “A REMINDER: After they have ‘cleaned up’ the content of artistic expression, they will begin to ‘clean up’ the content of political expression. Maybe then we’ll become concerned. -ART IS POLITICS- -RESIST THE EROSION OF OUR RIGHTS- -George Carlin”. 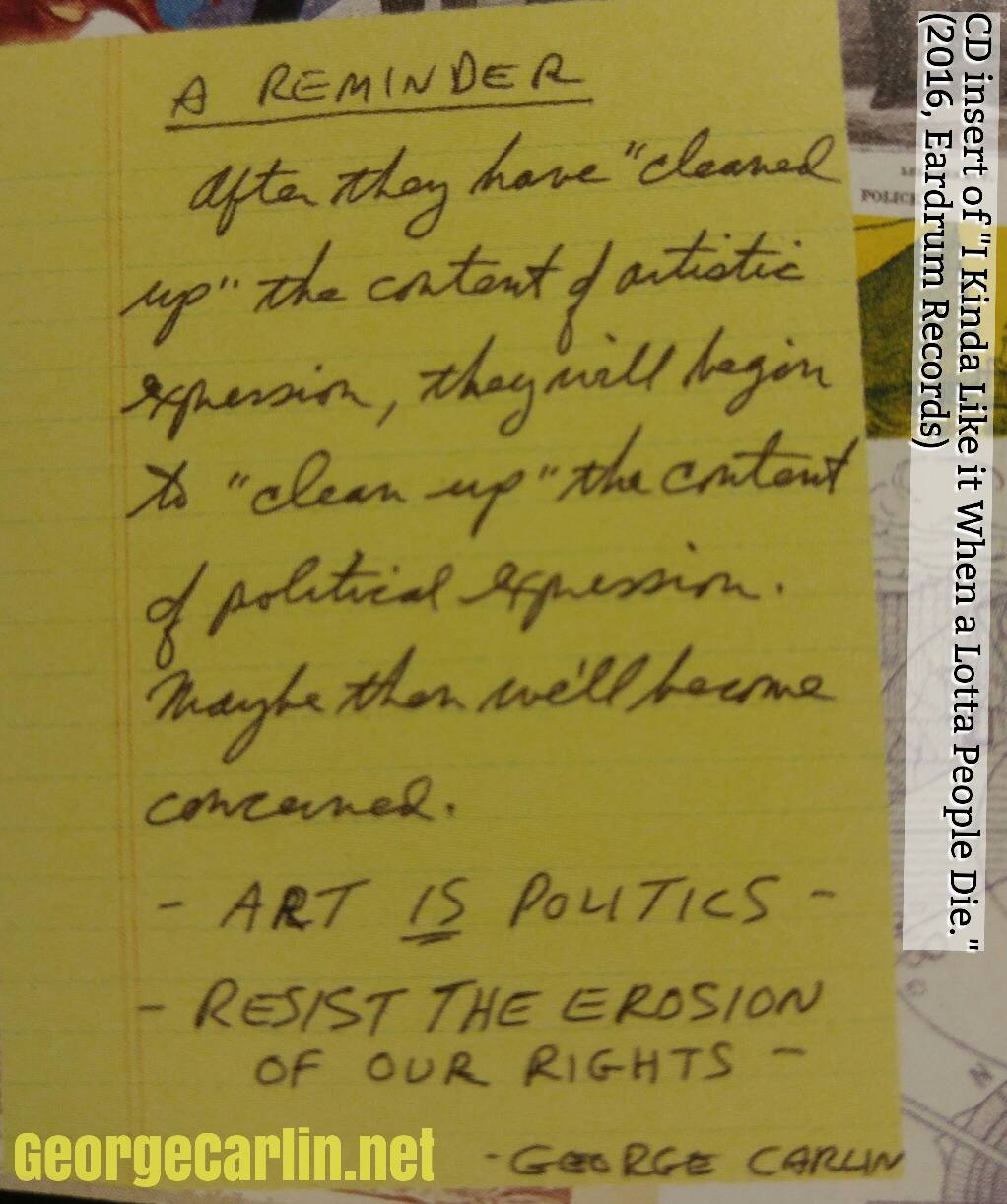