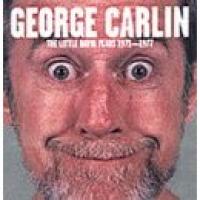 This CD box set consists of all six of George Carlin’s 1970s albums (minus compilations), which is why I’ve placed it here chronologically with the 1970s releases rather than among the 1990s releases. These albums were also all the ones he released on the Little David label, hence the title. The front cover of the box is a lenticular print, so that viewing it at different angles in the light shows George making different faces.

Also included is a bonus disc of previously unreleased material. The bonus disc contains the following tracks. There’s no indication of where the tracks were taken from (aside from the Coney Island recordings), but I’ve included by best guess for their date origins, and some short comments about them: